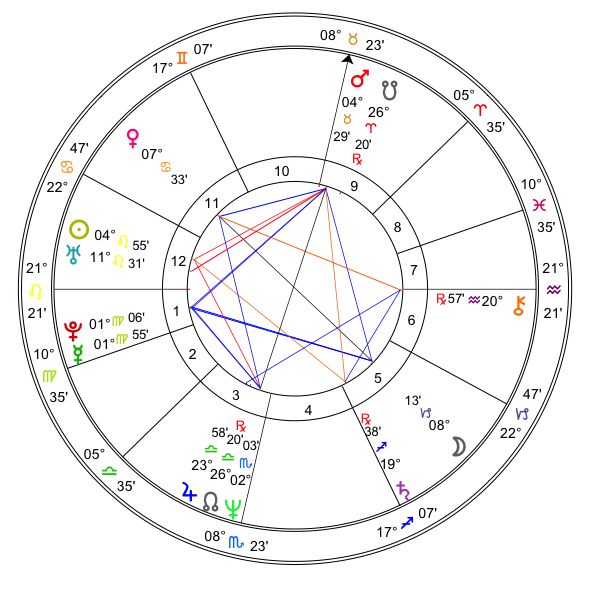 Terry Fox was Canadian athlete and sportsman who suffered in a car accident. After which he had pain and then had to have one of his legs amputated at a young age. He went on to run across Canada despite his prosthetic limb. Every year kids in schools celebrate his achievement by having the annual “Terry Fox Run” which raises thousands of dollars for others in similar situations.

Most of you are probably wondering what the heck this limerick is all about.

An aspect is an imaginary line drawn between two planets in a horoscope. People who have a yod in their charts are known as Yod Bearers as it indicates there are burdens that need to be carried through life.

The image is that of an isosceles triangle where the short side is 60 degrees and the two equal longer sides are 150 degrees.

The shape is somewhat reminiscent of an arrow or finger pointing thus the nickname of The Finger Of God. It is also referred to as the Finger of Fate.

In chart interpretation the area of life that the yod is pointing at is highlighted and becomes an important focus for that person.

A Yod is an astrological planetary configuration also know as a major aspect pattern which is formed when three planets line-up in a particular way.

A Yod is an aspect pattern composed of one sextile and two quincunxes. It looks like an isosceles triangle with one short side and two equal length longer sides.

A yod looks like a triangle. But it is different to a grand trine, T-square or a Thor’s Hammer because of the aspects it contains.

How to interpret a Yod

The broad stroke with interpreting yods is to look at the one planet being quincunxed (the green lines) by the other two.

This is known as the focal planet and is a sensitive spot in the zodiac which will be reflected in your chart by the house placement.