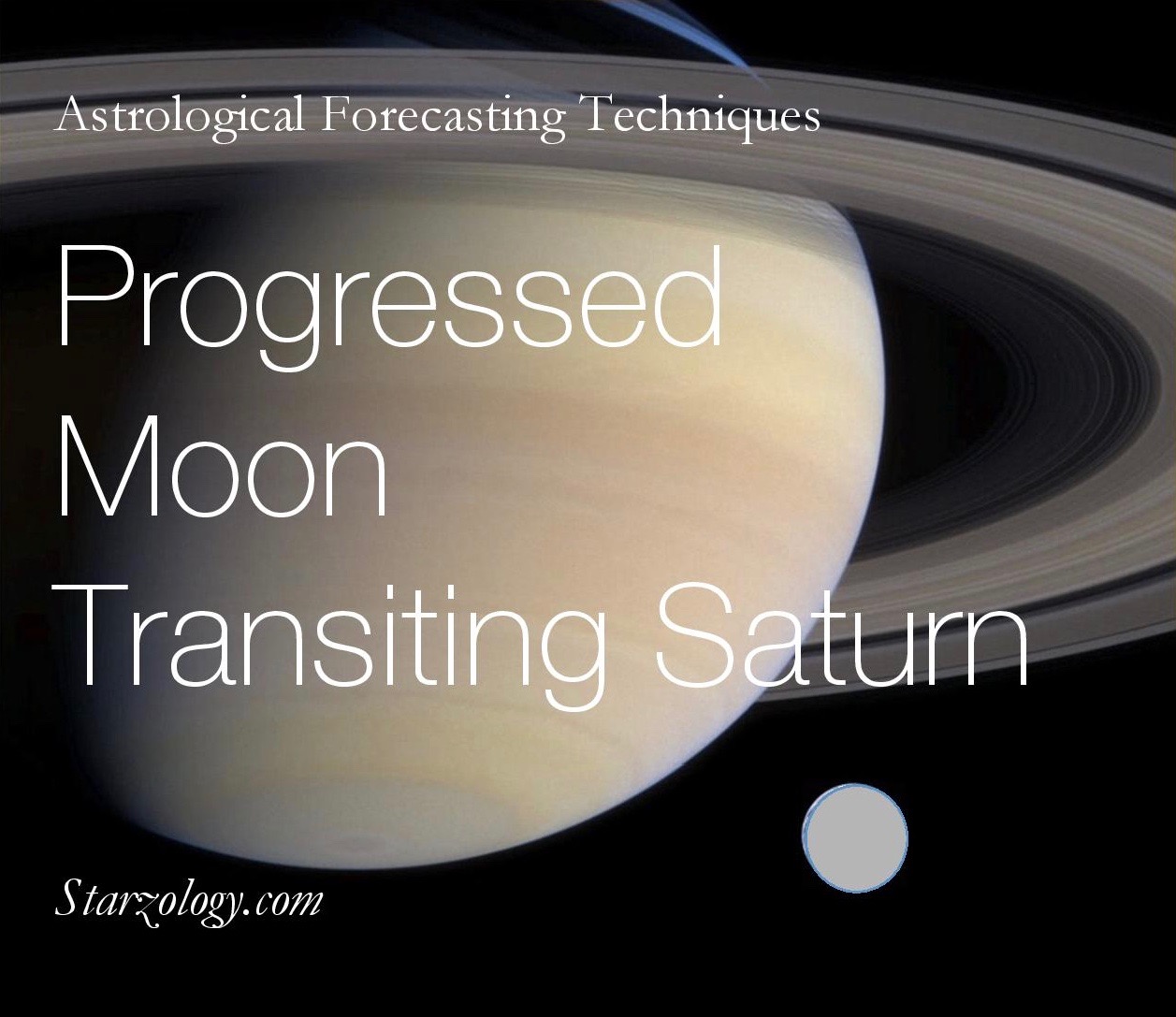 Forecasting in astrology can be a simple Sun sign interpretations that any astrologer can do, or the more detailed and complex forecasting techniques which a professional experienced astrologer will provide. It depends on the level of understanding you wish to extract from your birth chart which route you will choose.

In astrological forecasting there are many things to consider for each chart that you look at. One of the interesting nuggets in forecasting is the relationship between your progressed Moon and transiting Saturn.

This connection deserves a second look but only in some charts. It is not always present and therefore can be dismissed as not worth bothering about. But in the few charts that this does occur, you need to fully appreciate exactly what is going on and how this dynamic situation will affect you and for how long.

If you do have this complex attribute in your chart the energy from the contact will be in play for ten to twenty years. This can overshadow other things being brought forward in the forecast data. Pee Moon and Tee Saturn can be the full story for many people and for years of their lives.

The progressed Moon can travel up to just over three times around your chart in your lifetime. In doing so it makes all the possible aspects to all the planets and points in your chart. This speed and constant aspect contacts creates an endless variety for consideration for an astrologer.

As the progressed Moon takes +/- twenty-nine years to make one round of the chart it will therefore progress through each sign in about two years and five months (29 / 12 = 2.42y).

All things being equal and depending on the house system, the progressed Moon will spend a similar amount of time in each house .

Saturn moves about eleven degrees each year or, to put it another way, spends around two and a half years in each sign. Saturn takes about twenty-nine years to pass through the zodiac. You can experience up to three Saturn returns in your life.

Your Saturn returns are at approximately ages twenty-nine, fifty-eight and eighty-seven.

Saturn and Jupiter are very often the opposite side of a situation and, when they both bring in influence to bear, both can be negated.

Saturn through the houses shows where you exert control, can achieve things and will succeed in the long run. Saturn can bring structure to chaos and create formal organization in which to work.

It can be challenging when Saturn passes through some houses and you may have to tighten your belt and keep going.

The four major transits from Saturn are those to it’s natal position. Saturn transits can bring maturity, the ability to take responsibility and a certain acceptance of what the world has to offer. It can also be where we exist under some limitations or imposed boundaries.

Saturn is an indicator of your father, father figures or older men in authority in your life and they may become a feature under a Saturn transit.

Transiting Saturn square natal Saturn at about age seven most children are in big school and in the system and have to abide by timetables and rules.

Saturn opposition natal Saturn at somewhere in year fourteen is an indicator for puberty and physical maturity. Some adolescents can begin a casual job in the food industry for example, and start to earn a living in the big world.

Transiting Saturn square natal Saturn at the closing square happens around age 21 and is the threshold for adulthood.

First return at 28/30 the age of maturity where you stop blaming yoru parents for your woes and take ownership for your life.

Natal aspects between the Moon and Saturn

The issues of parents Mother (Moon) and father (Saturn) are closely linked. This person goes through life with their parents showing a united front to them regardless of what is really happening.

This person has a life where their parents may disagree on how to bring the. Hold up. There may even be a question on the paternity or the child. This person has tension about their parents that they take forward into their own lives where they become the authority and the pattern continues.

This person experiences diverse views from each parent or opposite view which may develop into outright conflict between their parents. The parents will play them off against each other. This placement frequently brings confrontation and flip flopping in discipline for this child.

Of all the planetary progressions the Moon needs close attention as the whole mood of the life shifts during the time it takes to pass through the natal chart and ingress the signs and houses. These subtle changes which happen over a two to three year period are often easier to appreciate in retrospect. As an astrologer you need to be on the lookout for this phenomenon in your chart.

The Moon (mother) and Saturn (father) can be at the root of many issues faced by people. So much so that this phenomenon (the Moon aspect Saturn lockstep) may easily dominate the whole life. Resolution is to be found in the natal placement of the Moon and Saturn and the energies need to be accepted into the life of the individual. This is likely to be challenging.

Difficult aspects (hard) are exacerbated. Although transiting Saturn will retrograde for periods and perhaps break the aspect it will reform when Saturn goes direct, is fast and reapplies the aspect.

Depending on the tightness of the orb of the natal aspect between the Moon and Saturn this aspect may be in orb, by progression, for the lifetime of the individual.

Over time it will ease away but this could take many years. It depends if the aspect is applying or separating. For example if the Moon is applying an opposition to Saturn it may hold the opposition for longer than if it is already separating in the natal chart.

In the natal chart if the Moon and Saturn are in a fourth harmonic aspect that is either a conjunction, square or opposition. This needs a further look.

If the Moon and Saturn are sextile or trine it just makes it an easier relationship throughout. Only bother about the fourth harmonic aspects.

How long will it be?

Second is the natal aspect applying or separating? This will show how long the aspect will be in orb.  If the aspect is applying from 8 degrees then it could be applying for years and then become exact and finally separating for ten years.

This time of”being in orb” varies in each case but will still be long time.

Well for someone with the Pee Moon Tee Saturn in aspect, the energies of the two planets are connected for much if not most of their life.

In your chart your Moon shows how you see your mother and your experience of her.

It suggests how she nurtured you and tells how she mothered you. Was she super cuddly or a bit cold or somewhere in between? Did you get beautiful clothes to wear or your brother’s hand-me-downs? What about her cooking?

As an adult you will remember your mother’s treatment of you forever. It is where you learnt how to care and how to provide nurture for yourself and others.

Saturn as your father

Saturn in your chart shows your father and older men like uncles and grandfathers. It shows how you experienced him and his fathering.

It shows father figures and men in authority over you. These people were (and are) teachers, headmasters, the police and judges.

It shows whether you dad was there for you, or a bit distant or an absentee father.

Well placed Saturn shows how you respect authority the law and if you respect your elders or not. Do you give your seat to a senior when on the bus? Do you call old men “Sir” or does it choke in your throat. All of these things are shown by your natal Saturn.

Much has been written about a Saturn return. Even people outside the astrological community know of the Saturn return. But what of the progressed Moon return?

It happens around age 29/30 and can be a time for change and of going back to basics as promised in the natal chart.

Any return brings the energies of the planet back to its true meaning for you, as the planet in question returns to its natal position in your chart. At this point it remakes all the natal aspects it has that are part of your natal chart interpretation. So aspects other than to the Moon or Saturn from either will be realigned.

Once you realize that your Saturn return is around the same time as you progressed Moon return you can see how they can be different for each person.

When you realise the potential implications of a simple Moon Saturn aspect in a natal chart it opens the door for further investigation of the long term effects of this phenomena. Parental issues may not be the only thing to think about but they may be laid as a full background stage for the life of the person.

As always care should be taken when interpreting charts and all situations will ideally be related back to the whole chart for a full rounded forecast.