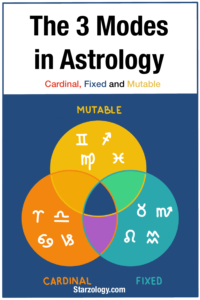 There are three modes (also known as modality, quadruplicities or qualities).

The three modes are cardinal, fixed, and mutable.

Each sign has one mode. Every mode has four signs associated with it.

The four Cardinal signs are Aries, Cancer, Libra, and Capricorn.

The four Fixed signs are Taurus, Leo, Scorpio, and Aquarius.

The four Mutable signs are Gemini, Virgo, Sagittarius, and Pisces.

Only count the seven visible planets of The Sun, Moon, Mercury, Venus, Mars, Jupiter and Saturn.

A mode is strong when there are at least two more planets in the mode than the next best mode.

For example, three planets in cardinal signs, four planets in fixed signs, and no planets in a mutable sign makes the mutable mode weak.

For a weak cardinal person, procrastination may be an issue.

They are tenacious, reliable, stubborn and steadfast.

They are resistant to change to the extent that they may have to overcome inertia.

Strong mutable signs are flexible, adaptable and inclusive. They are accommodating, adjustable, amenable to change and they can move things along.