There are four quadrants; the first, second, third, and fourth quadrants. They are numbered starting from below the ascendant and in an anti-clockwise direction.

Quadrants are formed by the ascendant/descendant axis and the MC/IC axes which cut the chart into four.

The quadrants are not usually equal in length when measured in longitude. However, the two quadrants which are opposite to each other are the same size, that is the first and third quadrants and the second and fourth quadrants. 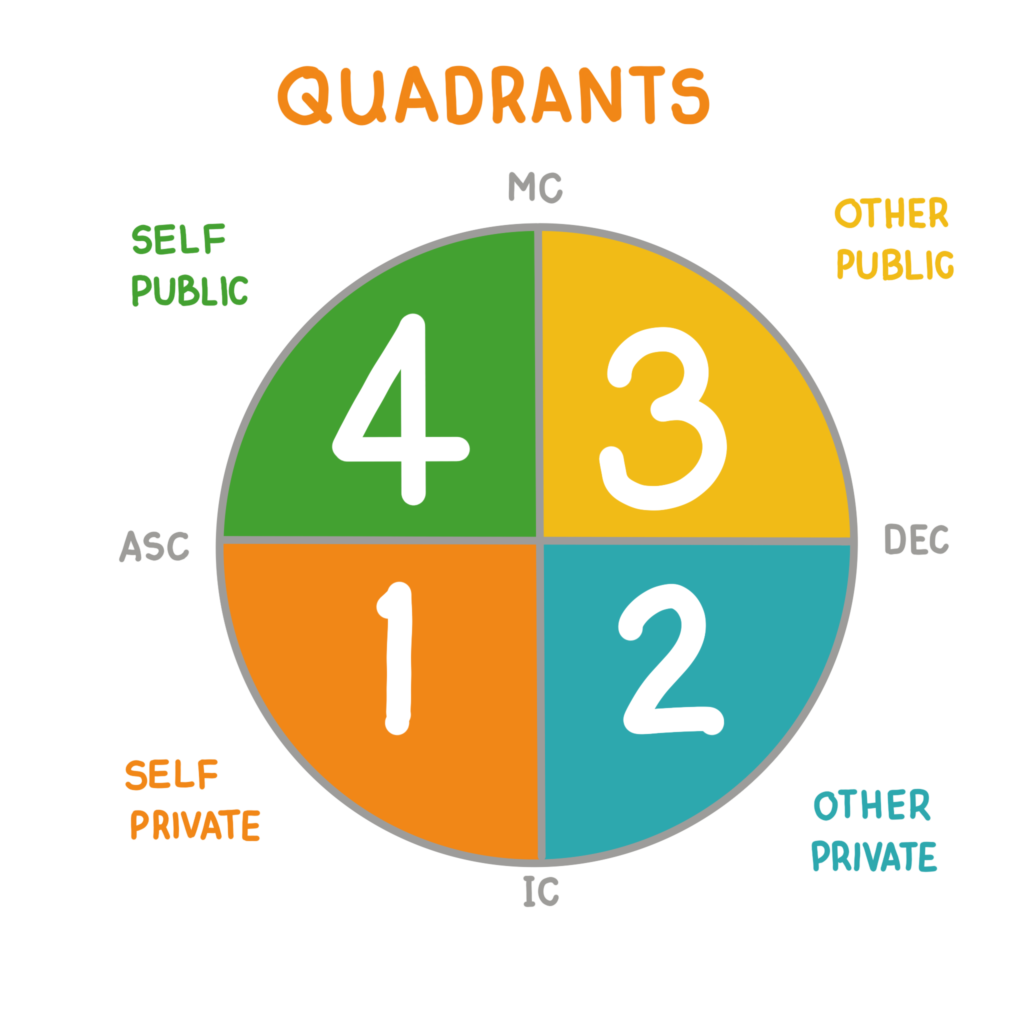 The first quadrant has the 1st, 2nd, and 3rd houses which are found between the ascendant and the IC.

The second quadrant contains the 4th, 5th, and 6th houses which lie within the IC and the descendant.

The third quadrant is made up of the 7th, 8th, and 9th houses between the descendant and the Midheaven.

The fourth quadrant covers the 10th, 11th, and 12th houses contained betwixt the Midheaven and the ascendant.

A quadrant is emphasized when it has two more planets than any other quadrant.

The first quadrant is known as the fire quadrant as Aries is on this cusp in the natural wheel.

When the first quadrant is emphasized you are an independent individual. There is a focus on yourself and your needs. You want to make an impression on the world

The water quadrant is the second quadrant because in the natural chart Cancer a water sign, is on the cusp.

When this quadrant is emphasized your identity is based on your family background. You are considered both skilled and capable. You may be sensitive in relationships.

The air quadrant is the third quadrant because Libra and air sign is naturally in this position.

When the third quadrant is emphasized, you forsake your individuality to merge with a partner. Your philosophies expand through your experience of purposeful partnerships. You are quite happy to play your part in society

The earth quadrant is the fourth quadrant as Capricorn is on this cusp in the natural wheel.

When the fourth quadrant is emphasized through your personal efforts and friends, you may aid humanity. You focus on your career for individual accolades. Having solitary meditation is crucial for your well-being

The quadrant ruler is the planet ruling the cusp of the angle.

If the quadrant ruler is in its own quadrant, it gains status.

The quadrant ruler needs to be noted if a quadrant is emphasized. In an astrology chart there are four hemispheres: north, south, east and west. 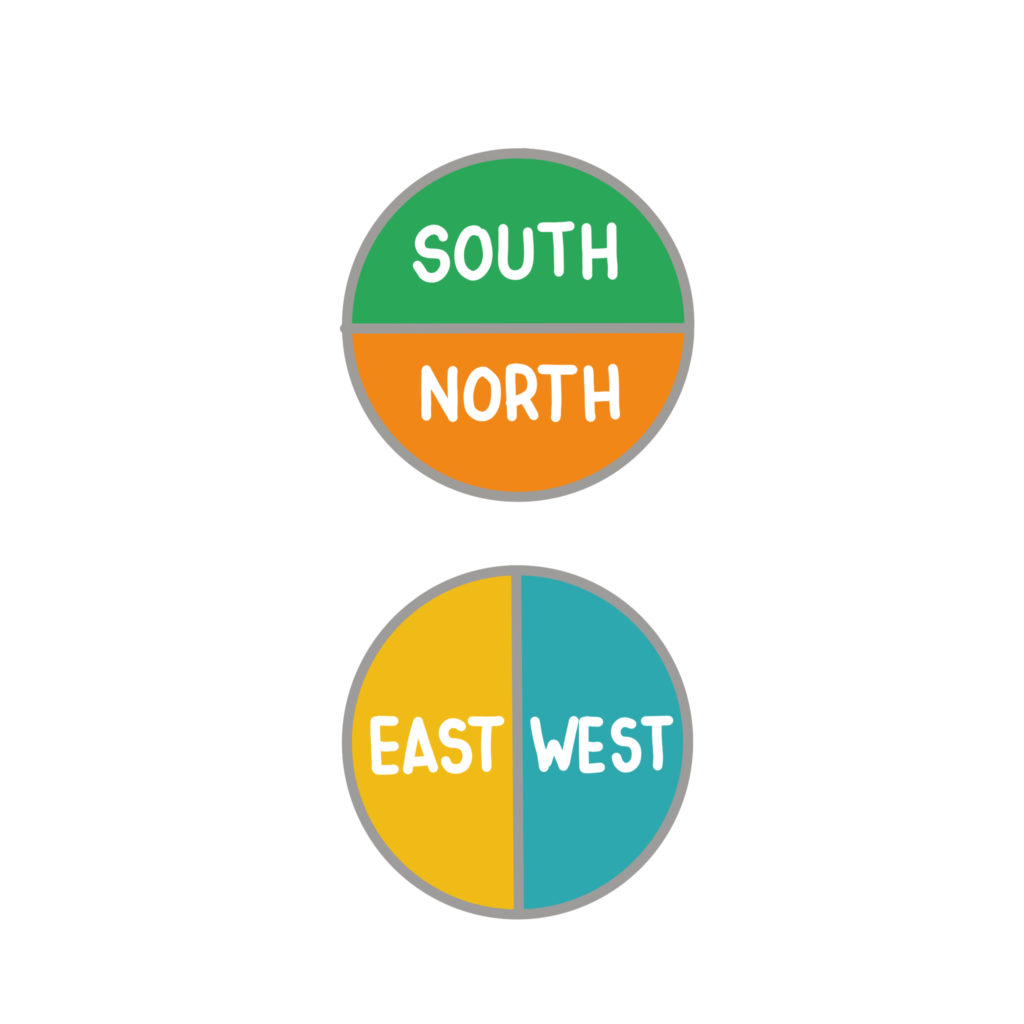 Bearing in mind that you only count the seven visible planets, which are the Sun, the Moon, Mercury, Venus, Mars, Jupiter, and Saturn.

A hemisphere is emphasized when it contains more than five planets.

The hemisphere ruler is the planet that rules the sign on the cusp of the angle of the hemisphere.

The northern hemisphere ruler is the planet that rules the sign on the ascendant.

The southern hemisphere ruler is the planet that rules the sign on the descendant.

The eastern hemisphere ruler is the planet that rules the sign on the MC.

The western hemisphere ruler is the planet that rules the sign on the IC.

If the hemisphere ruler is found in its own hemisphere that planet gains status.

Spans from the first house to the sixth house.

The northern hemisphere shows your personal matters it is the private hemisphere).

When the northern hemisphere is strong

If the northern hemisphere is emphasized, your identity and personal resources bring success. You are probably a private person and like to keep it that way. Your family is behind you in all you do. You may sometimes be distracted by worldly commitments or demands made on you by your career or society. Strong northern hemisphere people are often introverted.

From the seventh house to the twelfth house

The southern hemisphere indicates your outside world it is your public hemisphere.

When the southern hemisphere is strong

You are an extrovert if the southern hemisphere is emphasized in your chart. Your outside life is the highlight of your life. It is likely that you relish public acclaim. You probably strive for career and status. You may be distracted and even annoyed by the demands of your family and their needs.

When the eastern hemisphere is strong

You are subjective, and everything is really about you. You are a self-motivated and self- oriented and much can be achieved in life. You value independence and may forsake marriage. You enjoy your own company and have many personal projects on the go. You demand personal freedom to come and go at will which does not sit well with the demands of a marriage or partnership unless your partner is flexible as well.

The western hemisphere includes all houses from the fourth to the ninth. Interaction with other people (the “other” hemisphere).

When the western hemisphere is strong

Your interaction with others is the main focus of your life. You value personal relationships and marriage. You prefer to negotiate with others to find a win-win situation where possible. You learn about yourself through your interactions. There is a danger that you can become buried in a dead-end relationship.

Axes in a chart