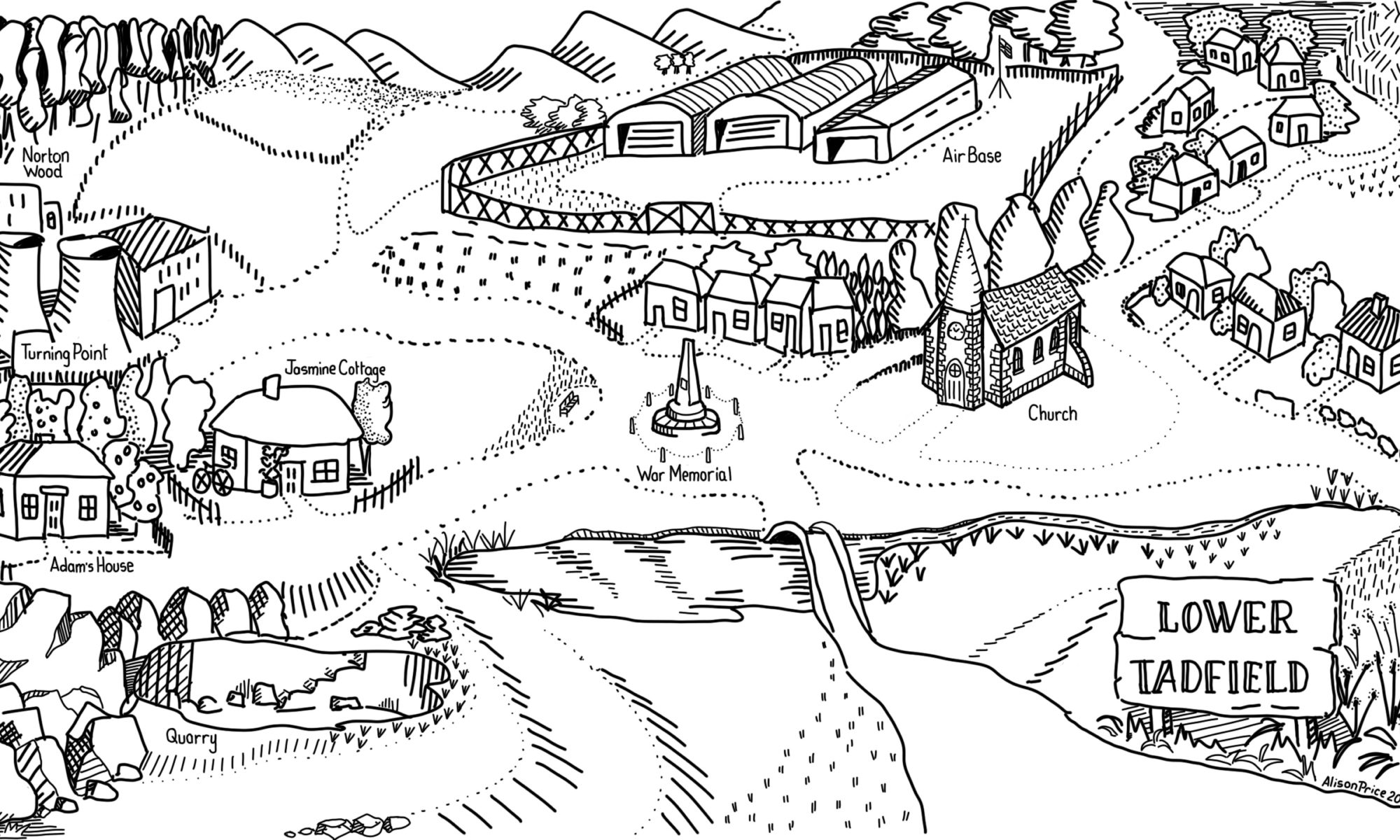 This is an old story of good and evil.

The opening scene is in the Garden of Eden where we meet the angel of the Eastern Gate, Aziraphale who expels Adam and Eve just after they taste the fruit. he is joined by Crowley, a demon.

The son of Satan is born and will be brought up on Earth by a normal family when he is switched out, just after birth for another baby at St Beryl’s Maternity Home.

By the time he reaches the age of eleven he will start the Apocalypse as mentioned in the book of Revelations.

The Nice and Inspiring Prophecies of Agnes Nutter, Witch are woven in and guide the characters to discover the time and place for the start of proceedings.

Get Your Good Omens Starzology Guide 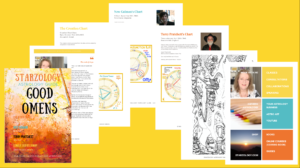 The four riders of the apocalypse represented as Hell’s Angels are summoned and descend on Lower Tadfield in Oxfordshire, England to start the end of days. 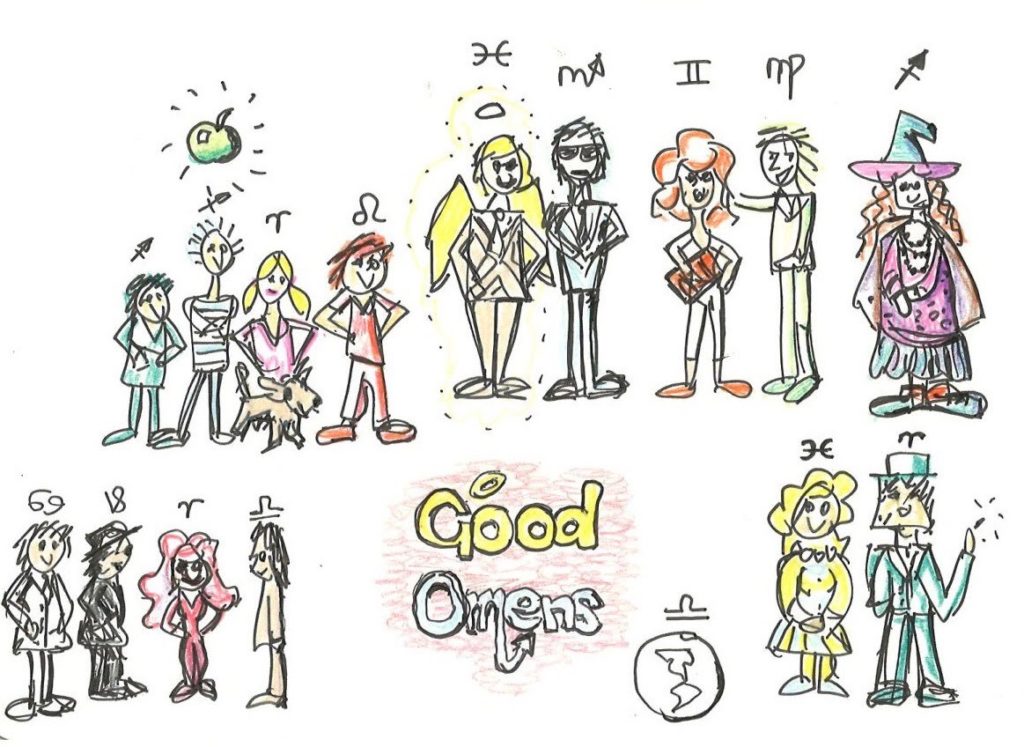 Ther are many characters in this story but here the main players and the gangs are mentioned.

The supporting parts are Mr. Young and R.P. Tyler and others.

Smaller parts include the management teams, the four other riders, the policemen and of course Elvis the cook.

The two spirits on Earth are representatives of heaven and hell. One for each side of good and evil.

They first met in the garden and have grown to like living amongst the humans. They want to keep things as they are and stop Armageddon.

They get into cahoots to be around and help bring up the son of satan and influence him to good so as to halt the bad things that are coming.

Crowley is a demon and is good friends with Arizaphale. He wears shades and snakes skin shoes and is a smooth talker.

Crowley is a Scorpio and the actual book cover has the glyph for the sign of Scorpio as the letter “m” in the word “Omens.” 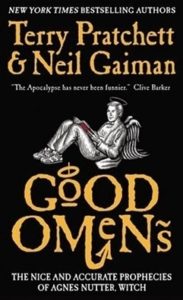 The angel of the Eastern gate is a Pisces. He is intuitive and even when discorporated can be an effective angel.

Aziraphale worries that an angel can sometimes do wrong like when he gives his flaming sword to Adam and Eve for protection as they are banished from the Garden for eating the fruit.

He runs an old bookshop in London.

Aziraphale asserts the Earth is a Libra and was born at 9:00 am (which is only fifteen minutes out) on October 21st, in the year 4004BC.

The Them is a gang of four eleven-year-old kids in Lower Tadfield of which Adam is the leader. They hang out at the quarry.

Adam is the gang leader and is symbolized by Leo. He constantly looks for ways to entertain the other three through role play and imaginative games. His love for Lower Tadfield and

His love for Lower Tadfield and the surrounding area with ponds and trees to climb is his castle and the Them are his subjects is so strong he had bent the ley lines and willed perfect weather (sunny and no rain) for months at a time.

Pepper is a girl in the gang and a bit a scrapper. She will fight the boys if they tease her about her long name which is Pippin Galadriel Moonchild.

The Hellhound sent to pad by Adam’s side.

When Adam says that he wants a dog for his birthday he describes one who can go down a rabbit hole and has an inside-out ear. A pedigree mongrel and this is what he manifests.

Sirius is the dog star and this fixed star rises in Egypt at the time of the inundation of the Nile and portends changes to come.

The humans weave the story and some are swept up in the drama from the past and the potential in the future.

Agnes is the last witch to be burned in England and was found by the Witch Finder General who was an ancestor of Newton Pulsifer.

Anathema is a young adult and has the book with the prophecies and moved to Lower Tadfield a year ago.

She discovered the ley lines were bending and the weather was unusually clement.

She has a theodolite, thermos and a bread knife and rides an old bicycle.

Newt joins the Witch Finder Army as a private under Shadwell.

He loves Anathema and helps her discover the beginning of the apocalypse.

Shadwell is in the Witch Finder Army. He takes on Newt and is protective of Madame Tracey.

He always wants to know how many nipples everyone has as more than two nipples is a sign of a witch.

He has a pin that he believes finds witches when he sticks it into people.

Madame Tracey is Shadwell’s neighbour and cooks his dinners. She offers intimate massage.

Madame Tracey is a psychic and holds seances to bring up the spirits. She unexpectedly accepts to host the discorporated spirit of Aziraphale. She helps him.

The Nuns of St Beryl’s – Gemini

St Beryl’s Maternity Home is the place where the son of Satan is taken by Crowley to be brought up in the care of an American family.

St Beryl’s is of the chattering order of Krakow and the sisters are:

In Astrology sisters are signified by Vesta the asteroid named after the sister of Jupiter.

The four Hell’s Angels ride in on their hogs and are drawn to the events when tipped off by the International Express delivery guy.

Carmine Zuderbeger is a sexy female warrior (Eris perhaps?) and has Aziraphale’s sword strapped to her blood red bike.

Black wears a motorbike helmet and plays the arcade machine winning every answer and bringing in new categories of; war, pestilence, famine and death.

White is found on the banks of the river where he has made the pollution make the fish float to the top and the swans sink to the bottom. He loves pollution.

This delivery guy finds the four riders in the places around the world and delivers each one a message and things. This alerts them to go to Tadfield for the start of the Apocalypse.

Adam’s Dad was there when his child was born and at the baby swop confusion. He chose Adam’s name. He enjoys smoking an evening pipe and defends his child Adam to the neighbours.

The complaining neighbour who walks his dog Suskie in the neighbourhood. Mr. Tyler knows that Adam and the Them scrump apples.

The two policemen in the audiobook were played by the authors of Good Omens, Neil Gaiman, and Terry Pratchett.

So we know that Neil is a Scorpio and Terry is a Taurus.

Elvis sings in the cafe.

The management training team plays paintball in the grounds of old St Beryl’s.

They meet up with Aziraphale and Crowley. Crowley gives them real guns to shoot each other although no one is hurt and they will only experience near misses.

I love this story.