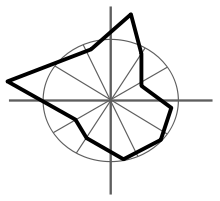 On your astrology journey there are many avenues of knowledge to wander down. Once you have the first twelve months of study under your belt, where it is all about the signs, houses, planets and aspects, continuing to study astrology opens up like a fan into a whole new world.

I often relate learning astrology to the medical profession where, everyone is a doctor (who knows the basics and can save your life) but some of them continue into speciality fields such as dermatology, neurosurgery and anesthesiology.

The analogy here is that all astrologers can interpret your chart (and most are very competent) but some continue to learn new techniques and gain more knowledge even if it is simple small pieces that can be used to tweak their readings and become more detailed in their interpretations.

To my mind using the Gauquelin sectors fall into the “nice to have” skills of any astrologer.

There are two Gauquelin sectors in every chart. They span a section of the zodiac which is different for every chart.

Not every chart has planets in the Gauquelin Sectors, but if your chart does then those planets are important both in natal interpretation and forecasting work.

A French husband and wife team Michel and Francois Gauquelin originally set out to disprove astrology and ended up creating the most in-depth proof for astrology. Their most famous research is known as The Mars Effect.

Briefly, they checked hundreds of charts to see if a particular planet was prominent, or on the ascendant or Midheaven, of people who had the same job.

How to find your Gauquelin Sectors

The Gauquelin sectors cover ten degrees of the zodiac on both sides of your ascendant and your Midheaven for a total of twenty degrees each and forty degrees in all. Both sectors together cover one ninth of the 360 wheel.

Example 1: Say your Ascendant is at 15 Gemini then your ascendant Gauquelin sector spans from 5 to 25 Gemini.

Example 2: Say your Midheaven is at 2 Aries then you Midheaven Gauquelin sector is between 22 Pisces and 12 Aries.

Planets in your Gauquelin sectors are usually in the first, twelfth, ninth and tenth houses.

Planets in a conjunction aspect (orb 8) to your Ascendant and Midheaven are automatically in your Gauquelin sectors.

Interpretation for your Ascendant Gauquelin sector

Interpretation for you Midheaven Gauquelin sector

If there is more than one planet in these sensitive areas of your chart they have to be interpreted in a blended way as they will all influence you from their position in the Gauquelin sectors of your chart.

Lin Ewing • Thanks. This was fun and informative.

David Perkins • Nice article, Alison…! Also really liked the in depth biography on Gauquelin, good work…! Just so you know, a library friend in Berlin managed to track down and is sending me one of the last few known remaining books by Krafft, which Gauquelin once said was THE book that go him started going in the statistical application of astrology:

I’ll let you know what’s discovered when I read it. Also, if I may add a few things to assist your article, one being that all graphs presented in an article should be explained:

The diagram you are using to illustrate your article is the original plot graph of Gauqelin’s study on elite French athletes, with this one being the representation of all of their Mars positions (the more athletes that have Mars in a certain house position, the further the plot travels from the center). As we can see, and this is statistically verified, there is significantly MORE Mars positions in the 9th and 12th houses, and of interest too, MOST of these Mars positions occurred at 12 degrees before the ascendent AND the mid-heaven!

Now even though his statistics were tested for their VALIDITY and RELIABILITY, and held up, they were still rejected by the Belgian Committee PARA. Sad, sad, sad, we are often rejected when we are ahead of our time, aren’t we?

Also, what the Biography Article in your link to Gauqelin did not describe fully, is that when he finally got the French Committee for the Study of Paranormal Phenomena to replicate his study in 1982, they actually ALTERED the protocols of the study, choosing just over 1,000 athletes at random out of a control group of 10,000 (allowing for non-champions to be in the mix), when in fact the original intend of his study was to analyze the ELITE athletes of France…

What a shame, he should of come here to the states or to India where the astrological societies are a bit more fair.

Alison Price • Thanks Lin and David for your comments.

David I would be interested to hear more when you get the Krafft book in your hands. I find the Gauquelin sectors very interesting, but at the same time somewhat elusive.

The link to the bio in my post is actually a third party bio (time) and clearly, David, if you have more information I will link back to you in future. I appreciate your thoughtful response here.

BTW I am always seeking quality Guest Writers at the link herehttps://www.starzology.com/about/write-for-starzology-guest-blogger-guidelines-and-suggestions/ and I invite you both (or any one else in the astrological community) to comment.  Alison