There is no birth time so I have cast the noon chart because that brings the margin of error down to 12 hours. This means you have to dismiss the ascendant, Midheaven and houses. What is left is correct which are the planets, signs and the aspects.

The Moon does change signs that day so if Gary was born in the morning he will have a Pisces Moon and if in the afternoon an Aries Moon. 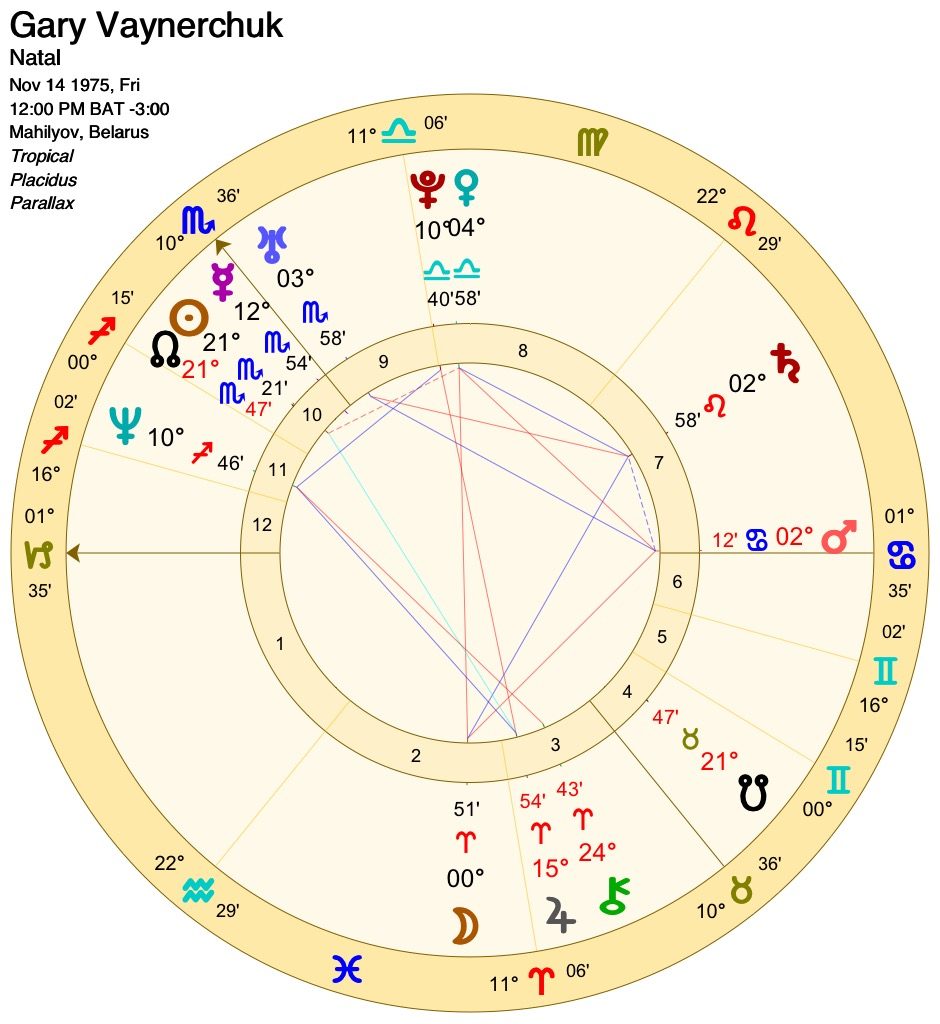 There is no earth and this indicates he may take a while to find his footing. he will likely surround himself with earthy types or strong Taurus, Virgo or Capricorns.

There are no mutable signs represented unless the Moon was in Pisces. At this stage it is difficult to say for sure.The strong cardinal mode suggests he does his own thing as a pioneer and rarely worries about what others think. he will lead from the front and if you choose to fillow he will be happy. There is not much room for compromise to suit you but when he feels he needs to make adjustments to his life or what he is doign he will change course and you need to keep up.

With his Sun in Scorpio it is in a power sign and indicates that he faces the haters and buries them. There is not much room for non-believers and he does not want to convert you, you have to believe in him for there to be a dialogue.

Moon in the morning Pisces in the afternoon Moon in Aries.

Mercury oriental this is quite a common placement for Mercury and does indicate a talker. People like Gary have a message and can bang on or almost beat a drum. his voice is powerful and his choice of words is not always suitable for delicate ears. Even though he uses strong language it is never derogatory, vulgar or dismissive of others.

Venus conjoined Pluto is one indicator of a millionaire.  Venus in Libra is strong and as the final dispositor and makes him likeable and easy to love.

If his Moon is in Pisces (which I rather suspect) it makes him protect his wife from perceived publicity and intrusion. She is never on display or brought forward as a prop for his life.

Much the same goes for his mother although we do get glimpses of her early teaching about truth and her expectations. That she would not praise him for doing nothing in particular but only for when he did things for which she approved. His mother likely instilled many values he still refers to today and this role may have been picked up and continues by his wife. A woman is probably  holding up a mirror of accountability for him.

Gary knows where he comes from, how far he has come and he may see how much further there is ahead.

Two strong planets are in this relationship the Sun is bi-quintile Jupiter which takes the credit for his positive buoyant outlook. This combination is double inspirational as they are the two fire planets.

Promotion is used to further his identity and place himself front and centre. He is not shy although there may be some natural stage fright at times.

He is proud of his journey. The path he takes satisfies his inner core and heart. He promotes himself and others from this place.

Gary uses his inbuilt charisma to grow. He enjoys being on the stage and laps up his audience. Jupiter trines Neptune which shows the early promotion of the Wine Library which was the first public presentation on Youtube that started it al. Both of these planets are the Pisces rulers who work together in an easy way.

Neptune rules film and video and he uses it in a powerful way. To promote (Jupiter) his process and document his journey.

Gary’s unaspected Mercury may be a clue to why he is so prolific in his speaking and the easy way he shares his thoughts on how to do things.

His method of documenting his journey to share with others (in the Daily Vee and other productions) as an inspiration is driven by the unfettered state of his Mercury which rules speaking, writing, orating and off-the-cuff advice giving.

We have often seen him in the after-chat in a dark street of a big city speaking directly to the people. His people. This is his favoured way to share his message and reach his audience.

He sees life through the “thought, word and deed” method and believes it as well. His currency is his message as his unaspected Mercury shows in its role as the messenger of the Gods.

Unusual transiting Uranus is conjunct his natal Chiron. This suggests he will use technology, the internet, the mobile phone, Instagram and Youtube to be a mentor for others.

He does seems to target the twenty-somethings and millennials as shown by the Uranus influence which rules youth, rebels, rappers and those who can change thinking and society.

His natal Chiron was invigorated when Uranus came into close conjunction and he started to use the Daily Vee as his platform. He only speaks to those who want to hear. He is not trying to convert you, but to guide you, through his experiences.

We can expect more insights and direct information on the who, what, when and how of building your business from Gary from now on.

Later this year Jupiter will stimulate his natal Uranus and there will be greater use of as yet unknown technology to broadcast his name and business to an even bigger audience.

The way this will unfold will set the path for unprecedented growth and expansion for him next year.

Jupiter conjoins Mercury, the Sun and his north node in Scorpio with three triple hit conjunctions.

This month will bring huge growth to who he is as he broadens his message at the same time enmeshing it’s identity to his own. The natal Sun blended to the north node (future) shows he is in charge of his destiny.

We can expect another book to be published now as his name becomes known by the general public on a wider basis. This time will echo his growth spurt from 2006.

His reach will stretch into areas presently untapped as his following gets even bigger.

Gary is still in an upwards cycle in his life and he is loving it.

The knack will be for him to build a sustainable future, using technology and his mind, at the same time shoring up what has passed to make it a good foundation.

He can build his platform one plank at a time and then stand on it.

Watch and see what happens next.

If you would like to have your own chart featured with a 1000 word interpretation by myself it is simple process.

Go to my Patreon page and become my patron. To get this special reward you will need to choose the Jupiter patron level which is the planet of growth and vision.

Once you’ve committed send me your birth details and I’ll enjoy developing your reading for creativity and inspiration.