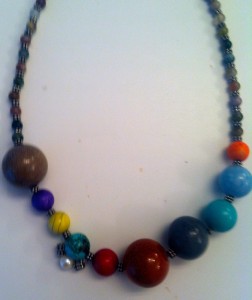 In a chart the first house (by sign, ruler, aspects or tenants) suggests the initial impression we make on others.

This is indicated in the clothes we choose to wear, our hair style, complexion and gait. Included in the ascendant complex are accessories and personal adornment items or to put it simply, jewelry.

I have always been particularly attracted to natural products such as amber, wood, glass, coral or shells.

Recently I created what I now refer to as my solar system necklace. It features the Sun and the planets including the Moon and Pluto.

I designed it from a selection of glass beads purchased at a local haberdashery. Each colored sphere represents a planet.

The trick is that you cannot buy one individual bead which looks like Neptune you have to buy a short string of perhaps ten beads all in the same design, so now I have a selection of Neptune, Mars and Venus-like spares.

When crafting a solar system necklace the challenge is to relate the bead size to the actual planet’s magnitude. Of course this is not an exact science or the Sun would be as large as a basketball hanging around your neck. However I tried to bring in some proportion.

The Sun is represented by the biggest bead followed by Mercury and Venus. Next comes the Earth and additionally it has the Moon as a pearl attached on an auxiliary string indicating the Moon’s special relationship with our home planet. I threaded Mars as a bright red sphere in a similar size to the other personal planets.

Then Jupiter the biggest  and followed by Saturn with a slightly smaller dimension. Next up are the outers with Uranus represented by an electric blue and then Neptune a misty cyan. Last is Pluto, again a smaller orange bead signifying the lesser mass of everyone’s favorite dwarf planet.

My necklace finished off by a continuous threading of tiny beads in variegated earth tones. Between each is a small silver spacer. Here is a secret, not being a pro beader, I simply tied a firm knot in the hemp thread at the back of the neck. I made sure the finished product was long enough to slip over my head so as not to need a clasp.

Altogether it is an unusual piece. It is also incredibly heavy to wear and I fear one day will burst apart under its own mass in the way of the big bang.

Having a unique necklace which is specifically designed with an astrological theme appeals to me.

Next time I get the urge to make a statement piece I think I may thread the planets in their rising sequence.

I have to do something with all the left over Neptunes.