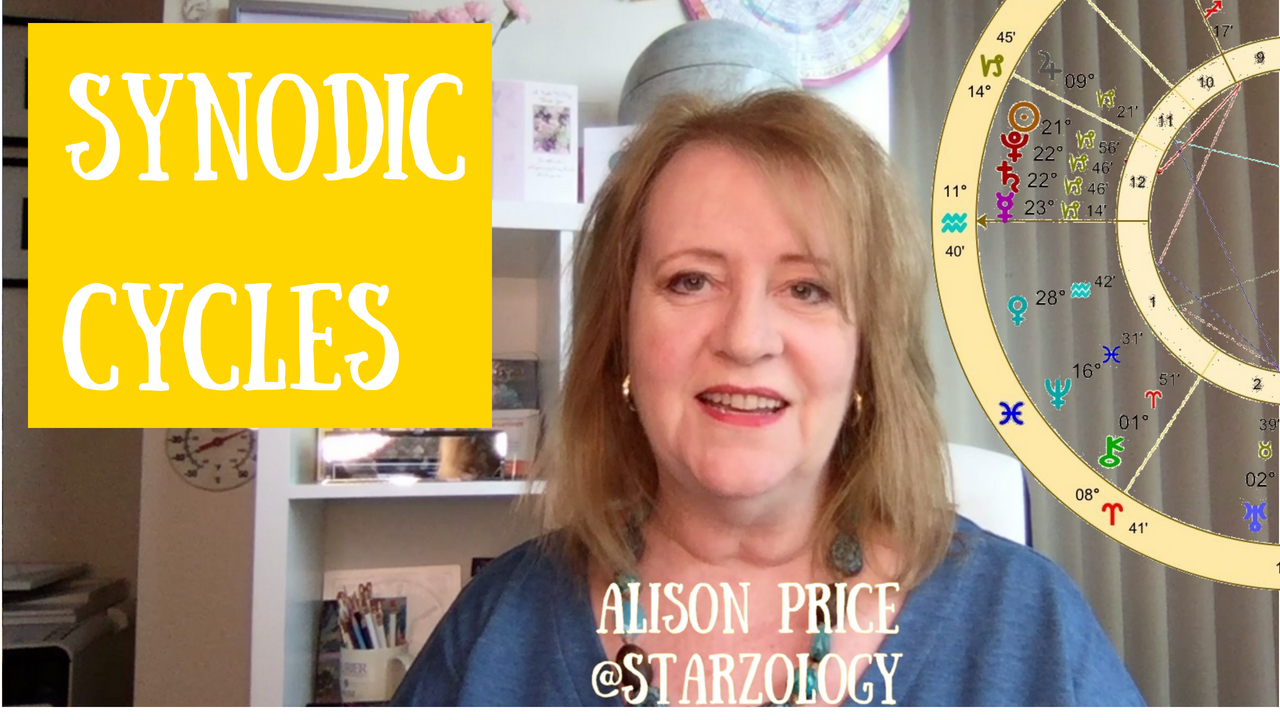 This post covers the principles of superior planet (excluding Mars) synodic cycles, and how they can be interpreted in a meaningful way for use in your astrology practice today.

Find out each planetary pair’s birth poin,t and where they fall in your chart.

See where we are in each cycle by phase.

Explore how the seeds of each cycle are played out over the years.

The chart for the conjunction shows the nature of the cycle as it unfolds.

The phases in which the planets are found describes the type of circumstances that can unfold during the phase.

Aspect Set for Synod Conjunction in the Natal Chart

Only use Ptolemaic aspects as follows:

The word synod is from the Greek, synodos, which means “a traveling together”

The last triple conjunction between the outer planets (Uranus, Neptune and Pluto) occurred at 8° through 11° Taurus, approximately between 576 and 575 B.C.

This was when Uranus, Neptune and Pluto, made a conjunction in Taurus. This triple conjunction occurs only every 120,000 years. This makes it the only one that relates to human evolution.

It was the most powerful stellium that has occurred in human history and heralded the beginning of writing, art and mathematics. 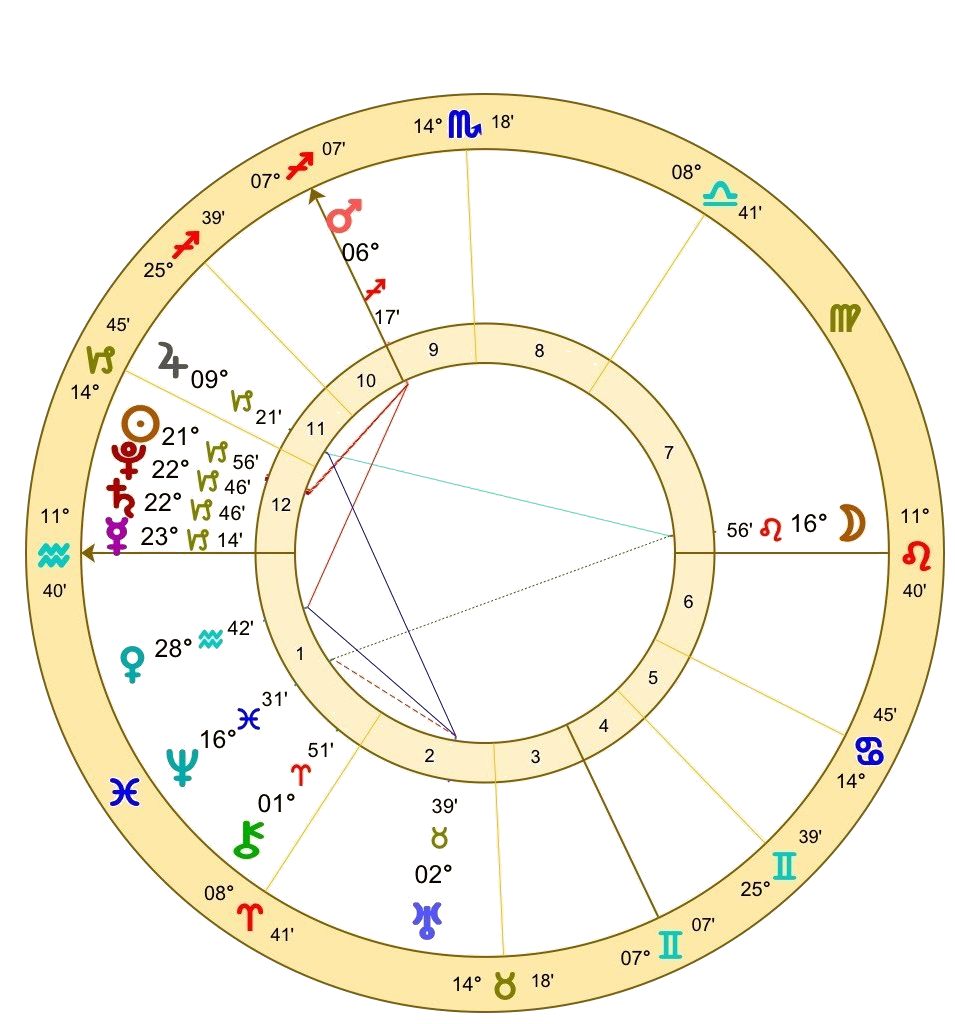 This cycle represents an overlying patterning of collective human experience on a very long-term basis. The last mutual conjunction of these three planets was in 578-575 BCE in a very close succession of just a few years. Around this time the world reached a crucial junction point and some of history’s greatest teachers were alive around then.

The graphic ephemeris at 90 for the triple conjunction that occurred in 576/575 BCE. 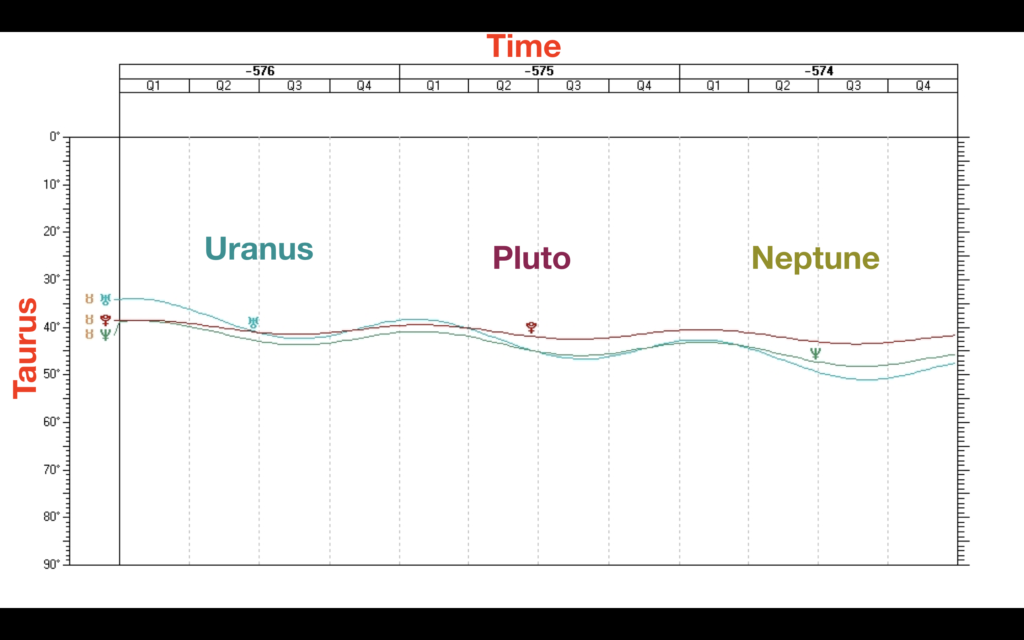 How to read this Graphic Ephemeris

The y-axis shows the cardinal signs from the top then fixed sign and then mutable signs. The sign Taurus is indicated and the three outer planets Uranus, Neptune and Pluto and indicated by their glyph and the wavy lines are the planets actual movement through the zodiac.

Where two lines cross is a conjunction between two planets.

The three did not actually come to an exact conjunction but with an eight-degree orb for conjunctions, they are within orb for many months.

When you cast the conjunction chart you have several options for each conjunction.

If there is only one conjunction, then that is the chart to read.

If there were three, five or conjunction then the last chart of the series is the chart you read.

If there will be one conjunction, then read that chart.

My new book “Synodic Cycles – Astrological Echoes from the Past” is in the final editing stages and will be published later this year.

It is a guide to working with synodic cycles in your charts and the chart of your clients.