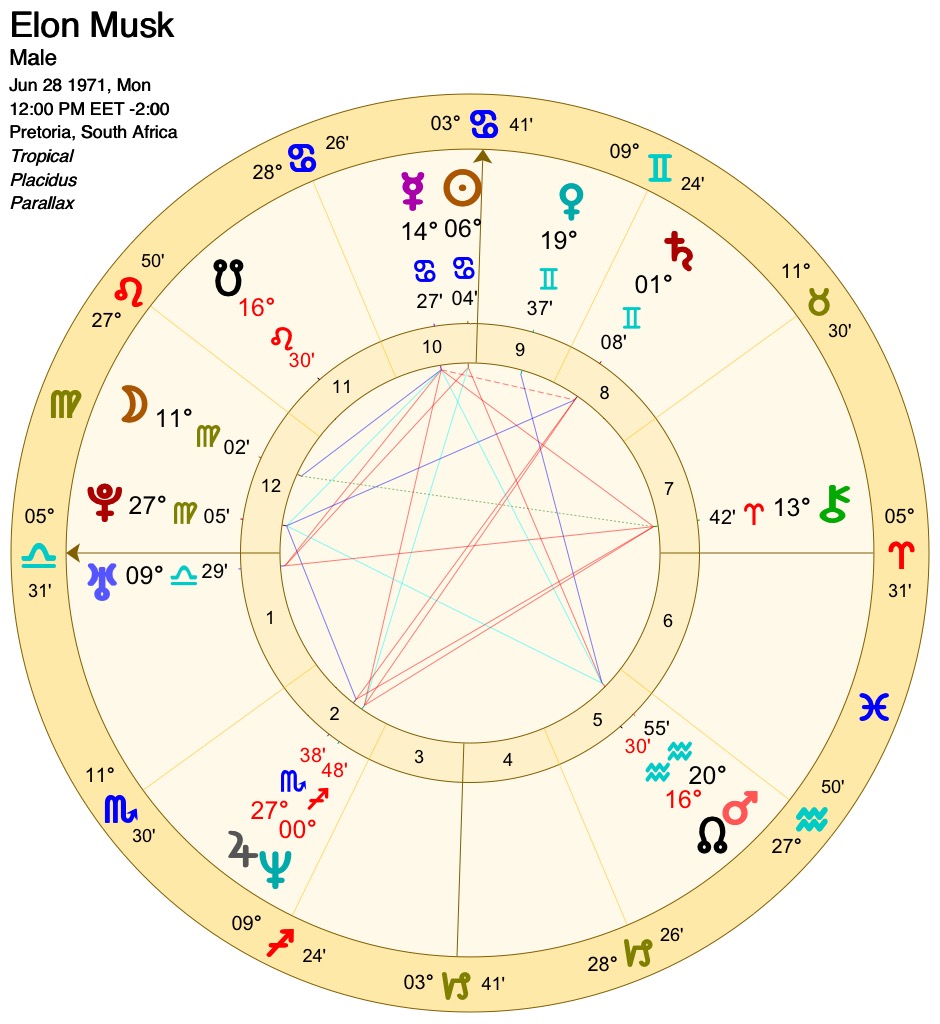 This is another featured chart of inspirational people of our times. I have written a brief interpretation for Elon Musk and brought forward the important features of his chart.

Of course there are many smaller and minor details in this chart but as with all good astrology you need to stay on the high roads and leave the byways and back roads for another day.

On a side note, I love that he is from South Africa as you may know I spent the majority of my life there so it is close to my heart.

Birthdate June 28, 1971, Pretoria, Gauteng, RSA. Time unknown. As the birth time is not available I have cast the noon chart so the planets will only be twelve hours off the actual birth time.

You have to ignore the ascendant and the houses and we don’t have the correct time. However what is left is correct and so you can proceed to interpret this chart. 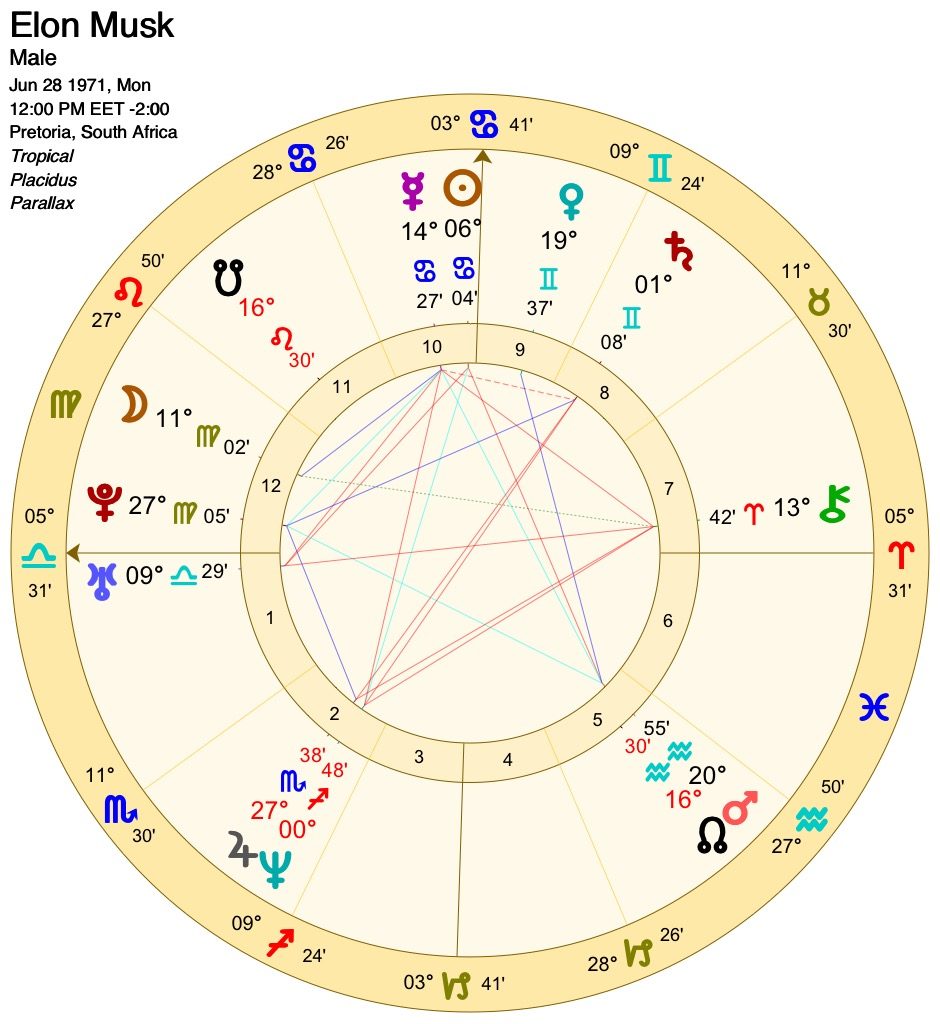 Elon has an air and water emphasis suggesting his ideas and emotions are closely linked. He will go with his gut feeling when making decisions. Once the ideas come to him the level of excitement generated will allow his internal compass to choose the path he should take by the reactions each idea evokes.

There is a lack of the fire element which means he has weak inspiration but as we shall see this is counterbalanced by the two fire planets, Mars and Jupiter, being so well engaged in his chart.

Because of the missing birth time we have no information on hemisphere or quadrant emphases. If you happen to have Elon’s birth time let me know and I’ll cast the exact chart.

The Sun in Cancer shows his deep feelings for his family and he sees the business as a family. He truly cares for his employees and will make himself available for them.

Venus oriental in the sign of Gemini the Twins indicates people speak well of him and they will give him the benefit of the doubt. They love his message. He has a warm manner that attracts his audience.

The crescent Moon phase is a sign of promise to come as his life develops. Thing will emerge in their own time.

The Virgo Moon brings an emotional component to detailed work and he has the knack of spotting minute flaws in plans, projects or people. With this attention to detail he does not mean to bring others down but he uses it as a way to make things better for all. The smallest feeling or nuance will influence him to reassess his team and with whom he surrounds himself.

There is an interesting mutual reception between the Moon in Virgo and Mercury in Cancer. This supportive relationship suggests the feeling in his voice will be a give away as the coolness of his demeanor is belied by the emotions as he talks and shares his ideas with others.

Using gesticulations and strong words to make people care and respond to his message is a tactic he employs to great effect. He can talk and people will want to be a part of it all.

With Mercury as the focal planet it draws the weakness and the breakdowns of his ideas through to be mentally processed. He probably has an active mind carefully assesses all inputs before he speaks. He will probably be aware of or be challenged by his perceived mental and verbal agility. He is a man of few words until he becomes comfortable with you. We may never know the real Elon as he protects himself through layers of technology.

The good Saturn trine Pluto aspect harnesses the power of determination which will encourage Elon to succeed.

The Jupiter conjunct Neptune (both Pisces planets) shows his exploration and vision are brought together to make something big. This is the sign of a dreamer.

The Jupiter opposition Saturn (and note both of these planets are also contra-parallel) makes this a double whammy opposition. His dilemma is between his reach and his grasp. Can he strive towards massive journeys without compromising his core goals? This aspect will be the energy that keeps him awake at night.

His natal Saturn is opposition to Neptune and again contra-parallel once more reinforcing his controlled imagination. He will likely see things through colour and feel and see the internal art they possess. This shows a duality of confidence coupled with the fear of following his own rainbow.

The Mercury square Chiron and both sesquiquadrate Jupiter form the Thor’s Hammer major aspect pattern. This drives the chart and the man. He may hesitate to speak up but his actions will be his voice. He may feel his background is weak but in time he will be lauded as a pioneer and explorer extraordinaire. In his own mind he is still a young man who struggles to make idle chit chat.

Inherent creativity is shown by the quintiles in his chart.

This is the most likely major aspect pattern that spearheads his innovation and creative drive. Mars is conjunct the north node in Aquarius indicating unpredictable leadership. As the head of his tribe he keeps everyone on their toes.

But that’s not all.

Mercury and Pluto are quintile each other and both are bi-quintile Mars. This forms the rare quintile arrow and points to Mars as the resolution for all his creative energy. He is truly a pioneer in fact he probably has many projects and ventures in the pipeline. He can turn his ability to any of them. This makes him a man’s man and a no nonsense kind of guy.

Mars trine Venus shows he will relish a beautiful woman on his arm. If she can communicate on his level or not it will not matter. He is likely to have the met love of his life at a young age and she may have been, or still is, the girl next door. He will use his early connection to the fairer sex as a yardstick with which to measure other women against.

The Sun biquintiles Neptune which suggests his vast imagination and how being identified with “out of this world” things is a part of his life.

He is a dreamer with the drive to make innovation. We have not seen all he can do. The best is yet to come.

If you would like to have your own chart featured with a high-level interpretation by myself it is a simple process.

Each month on YouTube one of my videos has details at the back on how to get you chart featured. You have to be a subscriber, comment and email me your details.